Sometimes we are quick to judge based on what seems apparent on the surface. To understand something in it’s entirety requires a more in-depth investigation.

For every item in this 1991 Radio Shack Ad, I can now do on my smart phone. In the 2013 ad, there are no innovations. However, is the idea of condensing multiple gadgets into one, really that high-tech or innovative? All of our “high-tech” devices including the internet are all still powered by the same inefficient, thermodynamic energy generation methods started in the 1800’s. Independent Energy has a new idea that can power our devices and the whole world in a green and truly high-tech fashion.

We cannot solve our problems with the same thinking we used when we created them. 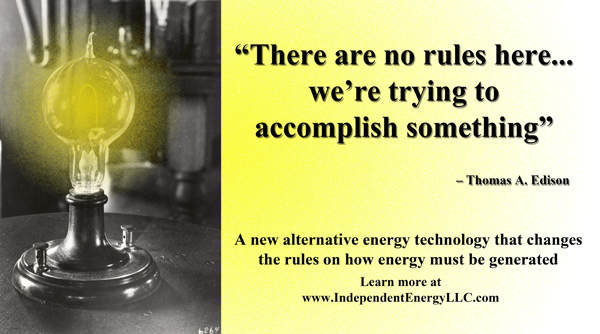 Trying to solve today’s energy problems using the same solutions that caused the problem in the first place doesn’t make much sense. Time to use a new solution that is not contained in the business-as-usual rulebook.

88% of the power generated in the United States comes from coal, natural gas and nuclear power plants. The combined weighted efficiencies of these power plants is less than 48%. That means that for every 100 units of energy consumed to make electricity 48 units are converted and 52 units are wasted.

This level of waste is unacceptable and it is not sustainable solution to our environmental challenges. Solar panels and wind turbines are a step in the right direction however the problem is that in order to create enough energy  you need an extraordinarily large solar array or extraordinarily large wind turbine. These are not particularly well suited or practical as a replacement to fossil fuel power plants. What happens when it’s cloudy? What happens when the wind is calm?  Independent Energy LLC, has a solution that will enable 100% off-grid, power  24/7 even when it is cloudy or when the wind is calm. An advanced smart motor-generator system operates from a battery but at such high levels of efficiency it draws far less energy from the battery allowing more time for the battery to be recharged from a smaller solar array and small wind turbine. This technological advancement will enable the typical home to generate all of the power it requirements from a small rooftop solar array and small wind turbine operating 24/7 off the grid with zero emissions.

Pioneers who have been trying to make the electric car compete against their internal combustion engine counterparts have followed a path that won’t succeed. The assumption is that an electric car must be recharged via our existing electrical power grid.  David Heron, in his Torque News article, discusses that the ideal situation will be that people recharge their electric vehicles overnight when power demand is lowest and the costs are lowest. The real challenge for electric vehicles, however, is that recharging via the grid, which in the United States comes predominately from coal fired power plants, is not very green at all. The premise that electric cars need to also rely on a centralized, distributed source not the best solution.  A better solution is to make the electric car independent from fossil fuels completely. This can be done by 1.) improve the motor drive system in an electric car to use less energy; resulting in A.) smaller and/or lighter batteries, and B.) increased range/performance and 2.) A battery recharging system that does not rely on the grid and utilizes green technologies. 3.) Smaller/lighter batteries. One reason solar and wind power is not considered a viable recharging system today is that both are inconsistent and both require a significant array to be at the appropriate size to provide the high voltage/amperage that can rapidly recharge an electric vehicle. The solution lies in a new ultra efficient drive motor that uses significantly less input energy (extended range and allowing smaller/lighter batteries) without compromising performance. Second, the electric car must use an ultra-high efficiency motor/generator that can recharge the electric car without the grid, from only “green” sources. The Independent Energy P6G motor/generator will enable a relatively small solar array in combination with a relatively small wind turbine to provide more than enough energy to rapidly recharge an electric vehicle, 24/7, year round, even after the sun sets or when the wind is calm. The P6G motor/generator approaches the generation of energy in a new, patent pending method which is far more efficient and will allow small home based and independent solar and wind arrays to be the only source for rapid electric vehicle recharging.

People resist change. Even those that are trying to to do the right thing with new alternative energy initiatives tend to try to solve the problem using what they are familiar with.  The idea that energy needs to be created at some centralized location and redistributed is not true. If one questions the basic assumptions and asks “is that the best way?and why?”  We might change our thinking about energy and what the best way to create and deliver it would be.  I believe that producing what is needed on site is a better solution?

John Farrell in his blog post titled “Community Solar Shouldn’t Be this Hard” discusses the issues and challenges in trying to build community solar energy projects. The community or centralized distributed network is subject to many disruptions and inefficiencies. It’s not the best solution for traditional energy and its not the best for green energy as well. Independent Energy LLC has a technology concept that has great potential to outperform any current distributed energy technology in any comparison category. It will allow for the independent production and control of your own energy, on site… applications will include powering your home, factory or office to your electric car or electric aircraft. 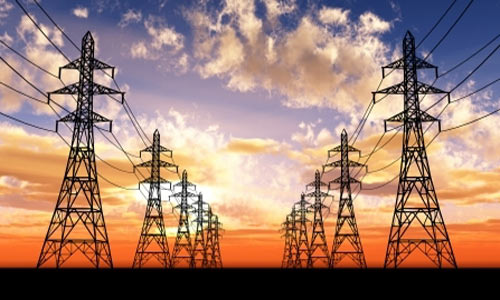